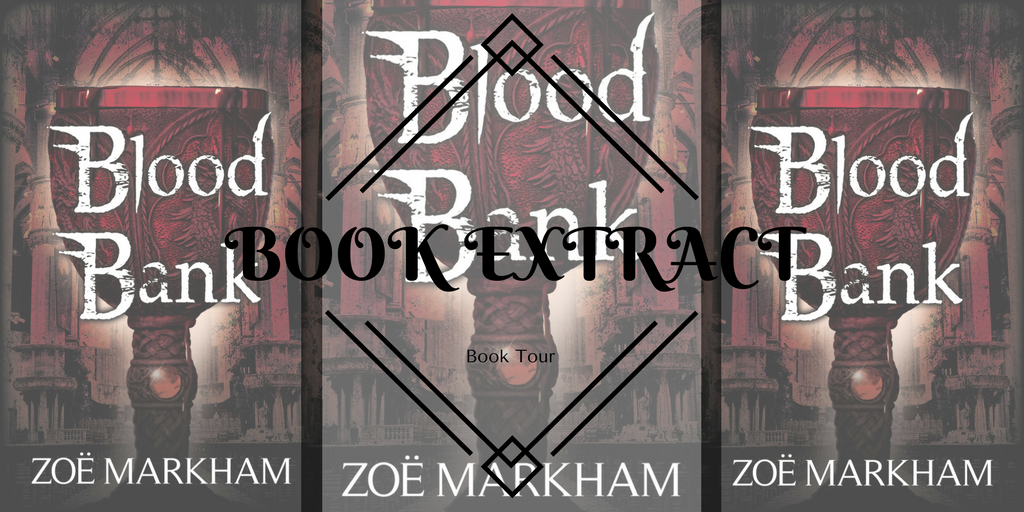 Hey Everyone. Today I have an extract for you for Blood Bank by Zoe Markham.

Benjamin is a programmer moonlighting as a security guard at Dystopia, a seedy club that caters to the down-and-outs, the desperates, the addicts. He’s been building his reputation, saving for a way out – but when he rescues a young woman from the nearby estate, he may just have stepped too far out of line…

Lucy is ordinary; a girl with a deadbeat boyfriend, a normal life and college studies. But when her world takes an odd twist, she starts to wonder about the people she’s meeting, the situations she’s in, the odd aversions and attacks happening around her. They’re just coincidences…aren’t they?

And Zack is in deep trouble. He’s losing his girlfriend, drowning in debt, and has dwindling job prospects – and that’s not the worst of it. His debt is to people who won’t ever forget it, and who want the things closest to Zack’s heart: his blood – and his life.

In the heart of Swindon, an ancient order hides in plain sight, spreading their influence through the streets like a disease. But despite their widespread power they are catching up with the modern world: the vampires are going online, and the Order is about to become more powerful than even they would have dreamed…

Kashif was the first to wake. Too weak to cry out, he could only lie still and try to piece things together in his mind. He tried to lift his left arm but couldn’t move it, and the effort it would take to shift his whole body and try to lift it with his right was unthinkable. One of them would be down here somewhere, keeping watch, although he didn’t know why they bothered. It wasn’t as if he was going anywhere. The combination of the venom and the blood loss was more than enough to keep him a compliant prisoner.

As he lay back and listened, he slowly became aware of the other presence in the room, which gave him the incentive he needed to force his head up and look around. Pain lanced through every nerve in his body as he strained upwards, and before he could register any more than a dark shape on the opposite bench, his head dropped back and hit the stone hard, knocking him out once more.

The thud woke Zach, who was in considerably better shape than his fellow donor, broken wrist, angry black eye, and all. His left eye could barely open, but his right told him everything he needed to know. The venom was still functioning as an anaesthetic, and although his wrist throbbed and felt awkward, it didn’t pain him as such. He straightened on the bench and held his left wrist up to his chest to try and stem the bleeding, for a moment at least. He managed to lean over and check the level of blood in his chalice. Chalice. He hated the word. It had become so heavily corrupted since he’d got involved with the Clan. It was essentially an oversized, grotesque tumbler. There was a small army of them down here, a never-ending supply of the gaudy, golden monstrosities. Each held around two pints of fluid, and when full they were stored in a twisted version of a larder further down in the basement. Like everything else down there it was made of ancient stone, and cold as the grave. There was never a need for refrigeration; the temperature didn’t get anywhere near high enough for the blood to spoil.

Full chalices were lined up on the stone shelves inside, where they awaited the special masses performed by Father Andrew and his psychopathic parody of a Deacon, Christopher. Zach’s chalice was full, and he was damned if he was going to be bleeding down here without it counting for anything. He called weakly for the priest in the darkness.

If you are interested in purchasing this book then you can do so here on Amazon UK.

Hey, I'm Emma and yes as you've probably guessed I am a complete and utter Stationery addict and Bookworm. I have had a love for Stationery since I was young and it's something I've never grown out of. I find it helps me be productive, plan out my dreams and goals and gives me a creative arena. I love books because they allow me to escape into a world different to my own, to feel invested in the lives of characters you think you know. To feel their hurt, pain and laughter. I have 3 beautiful children ranging from 12 to 2 and a partner who makes me very happy. I see my blog as an extension of me, it's not perfect but it is my spirit and essence. I hope you enjoy reading the content I write about:) View all posts by Emma-Louise